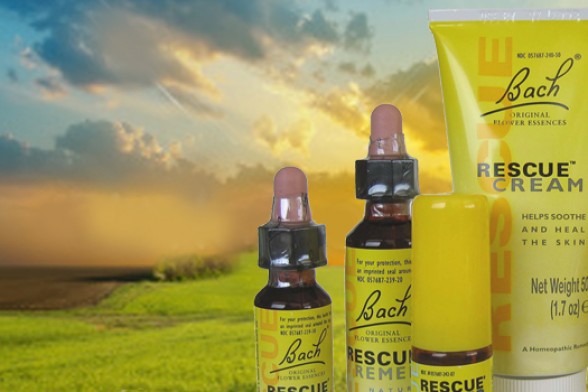 I’d like to thank Elizabeth for sending me information about Bach Flower Essences that might be good for eating disorders. I will share Elizabeth’s recommendations in this post, along with some observations about natural remedies.

What Are Bach Flower Essences?

They are 38 plant and flower based formulas created to help bring negative attitudes and feelings into balance so we can deal with life’s emotional demands. They were developed in the 1930’s by Dr. Edward Bach, a medical doctor and bacteriologist. He created them to promote wellness by tapping into the natural healing of our bodies. The flower essences are considered to be safe for everyone, according to their website www.BachFlower.com

Rescue Remedy is the most well-known Bach Flower Essence. It acts as a kind of antidote to stressful situations and is made up five different Essences: Star of Bethlehem, Clematis, Impatiens, Cherry Plum and Rock Rose. I used this in my corporate days when I had big sales meetings or some other stressful event – it really seemed to work for me.

flower essences are considered to be safe for everyone

As Elizabeth said to me, who knows if it’s mind over matter? Or perhaps, even the placebo effect? Our minds have a powerful role in our health and can often bring our bodies into balance, just by belief. While this is an ancient truth that is still espoused by Eastern Medicine, it was re-discovered in Western medicine in World War II. When they ran out of painkillers for soldiers, Dr. Henry Beecher used saline injections. These injections did nothing to kill the pain, but since the soldiers believed it would, they felt less pain. This is when Dr. Beecher coined the term “placebo effect.” His further studies found that belief was responsible for up to 35% of a therapeutic response to any medical treatment. (source: National Center for Complementary and Alternative Medicine).

Many Solutions For Healing

If you’ve read my other posts, you know that we have a “second brain” in our gut, called the Enteric Nervous System. This second brain communicates with the brain in our head via the vagus nerve. This is the biological manifestation of the belief in mind-body medicine or spirituality. Because of this mind-body connection, it is difficult to pinpoint whether an action initiated in the mind impacts the body or vice versa.

In fact, since we are all different, what works for each of us may be different. That’s why I often recommend experimenting with healthy options that you are attracted to. Sometimes, just one step that you take, whether in mind or body, is enough to cause a shift toward improved health.

If you are curious about Bach Flower Essences, take a look at the variety available on their website. You may find one or several to make into a blend that works for you.

Here are the Essences that Elizabeth found for eating disorders:

In a recent LiveScience article by Bjorn Carey, a study found that middle-aged English people were healthier than Americans of the same age. Interesting that Americans spend more than two times what the British do on medical care and are still not as healthy.

As my husband and I discussed the article, we were coming up with theories for why. My thought is that the British are more open minded about natural health alternatives. For example, they have Bach Rescue Remedy in the regular drug store/apothecary/pharmacy. Can you imagine having homeopathic remedies side by side with over the counter drugs? In America, homeopathic remedies are relegated to out-of-the-way health food stores. Probably the result of the big drug companies, lobbying for a monopoly on American consumerism.

Additionally, I have read several British novels and have seen reference to characters taking Bach Rescue Remedy in a stressful situation. What do the American characters do? Usually shop, drink alcohol or maybe even Xanax!

If someone lives in England and can shed some light on this, I’d be very interested! Or if you have some theories, I’d love to hear them! In the meantime, follow your heart toward healthy options that work for you.

Some Other Theories & Resources on the Health of Americans vs. British