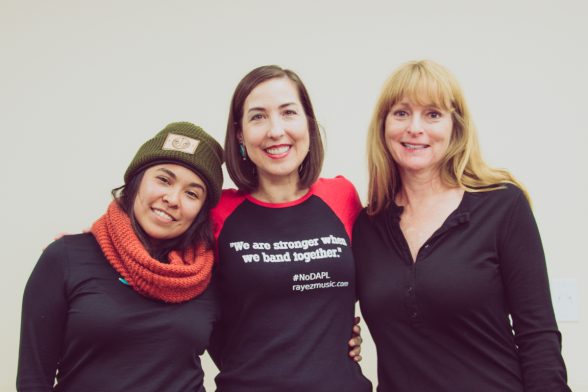 In Native American and indigenous medicine, Mother Earth is our greatest provider of health and healing.

When the earth’s natural resources are threatened, find out how this community sparked a movement that captured the hearts of millions of people around the world. We will reveal why indigenous people’s voices can remind us of enduring principles that are the bedrock of wellness, peace, and community.

Jade Begay, (Diné and Tesuque Pueblo), is a filmmaker and the Sustainability and Justice Communications Fellow at Resource Media, a nonprofit PR firm that provides media strategy and services to groups who are working to protect communities and the environment. In May 2015, Jade completed the Environmental Leadership MA program at Naropa University which trains students, like Jade, in how to lead organizational and community transformation towards an environmentally and socially just and sustainable society.

Currently Jade works on a wide range of issues from Women’s and reproductive rights to Climate Change to racial justice and to nuclear guardianship. Jade is also a facilitator and trainer in diversity and inclusion work. At the foundation of Jade’s work is her life’s purpose to support First Nation communities in restoring ecological balance and protecting their cultures. Her camera, her communications skills, and her passion for justice are her tools for amplifying Indigenous and marginalized people’s voices and movements.

The Standing Rock Sioux Tribal members are descendants of the Teton and Yankton Bands of the Lakota/Dakota Nations. The people of the Sioux Nation refer to themselves as Lakota/Dakota, which means friend or ally. The United States government took the word Sioux from (Nadowesioux), which comes from a Chippewa (Ojibway) word which means little snake or enemy. The French traders and trappers who worked with the Chippewa (Ojibway) people shortened the word to Sioux.

The Reservation is thirty-four miles south of Mandan, North Dakota. The Cannon Ball River runs along the north side of the reservation and Ceder Creek in the northwest side. The reservation ends at the Perkins County and Adams County line in the west and the Missouri River on its east side. The southern line of Standing Rock Reservation ends with the Cheyenne River Reservation line. The total land area of the Standing Rock is 2.3 million acres and of that 1,408,061 million is tribally owned. The land is an important part the Lakota/Dakota people’s lives.

Learn more about the land, history and culture of the Standing Rock Sioux Tribe.

Thousands of people have gathered in Cannon Ball, ND to join Standing Rock to protect the water and Mother Earth from the DAPL. The allies at camp have shifted in numbers from 10,000 in the warmer months to approximately 3,000 people as the winter came. There has been an unprecedented number of tribes from around the world coming together in unity for the first time to stand up for the water and the rights of indigenous peoples.

Indigenous peoples have experienced treaty violations for hundreds of years. They have watched their access to land, clean water and resources shrink. Since this pipeline is to go under the Missouri River and is likely to contaminate their water supply, this movement is about preserving access to clean water. The belief is that “water is life” or “min wiconi.” Because while oil may make engines run, it cannot fuel our human bodies. Without water, we die.

Environmentalists have been called to stand with Standing Rock because in addition to wanting clean water, the DAPL is fracked fossil fuel. There is a call to stop depending on fossil fuel and look at renewable green energy.

Celebrities, politicians like Bernie Sanders, health enthusiasts, human rights activists and spiritual people all over the world have felt called to Stand With Standing Rock. Access to pure water from the Missouri River is important for 18 million people downstream. Supporting Standing Rock gives us inspiration to stand up for clean water across the nation as well.

Many people around the world, watching the videos that journalists and Water Protectors are filming, are calling the actions of the police a human rights violation. Videos show Water Protectors being shot with rubber bullets, maced, sprayed with water cannons in below freezing weather, and subjected to concussion grenades. Arrests have resulted in strip searches, confinement without food, felonies (that were later dropped), and other heavy-handed practices.

Here is more information about the stories we shared on the show:

November 20th Water Protectors Attacked At Barricade – You can watch the video here.

Your prayers, loving support and kind words matter! They are nourishing to the Water Protectors and inspire them to stay strong.

End of the Line: The Women of Standing Rock Film

Local Media in Bismarck, ND – you can often write comments after a story, these are DAPL stories.

Check to see if your bank is funding the Dakota Access Pipeline and move your funds to a bank that supports ecologically friendly projects or communities.

Sign to Tell Obama To Stop The Dakota Pipeline!

Tune in next week to Loving Yourself to Great Health, David Getoff joins me to talk about the myths and truths of nutritional supplements and antioxidants. Discover how to find out what you need for your own health and healing.