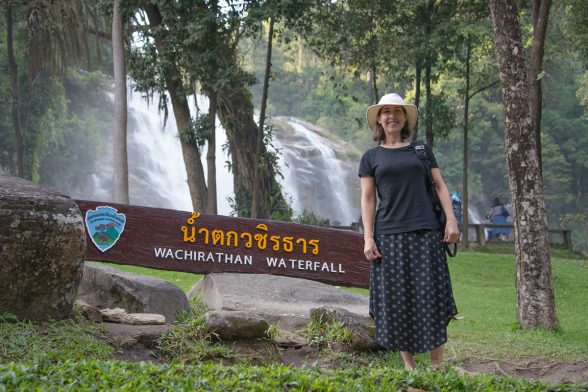 I wasn’t ready yet. Every time I drove past her home, I still had that sinking feeling inside. Every time I heard a song we liked, there’d be a moment of sadness. A whole section of clothes, hats, and feathered flapper headbands in my closet remained untouched…the ones I’d wear because it was our “thing” to dress up for events. To “celebrate life,” she’d always say.

Two months after my dear friend, mentor, co-author and partner in mischief, Louise Hay, died, I was on a plane to Thailand. Fifteen hours of flying to a country and city I’d long dreamed about, but never visited. I found myself a day ahead in time and in an entirely different culture. You know what it’s like when you have to operate in a whole new frame of reference? An entirely new language, new food, new traffic patterns. Nothing is the same. I needed this vacation more than I could imagine.

The first week into my trip, I began dreaming. On my third night, I dreamt that Louise and I were walking down concrete stairs. It was dark and I was feeling a little off balance from carrying a lot of bags. She was in front of me, laughing, calling my name. We were going somewhere delightful, but before we got there, I woke up. The dream was so vivid, that I lay in bed wondering what it was all about, still feeling it physically. By the time I opened up my computer, the first e-mail was from Mollie Langer at Hay House about planting trees for Louise. With the dream still alive in my body, I realized, now I was ready. I told my husband, Joel, “I want to plant a tree for Louise here in Thailand.” “How?” Where?” He wanted to know.

I didn’t know, so we called our new friends at Chiang Mai Foodie Tours. They had just taken us on a foodie tour where we got to learn how and where locals eat. Would they do a custom tour for us and help us plant a tree? We set up a tour for two days later. In the meantime, our job was to get the tree.

This wasn’t a small challenge. The garden market wasn’t far, but no one spoke English. We needed a tree native to Thailand. The one I wanted was a Bodhi tree, also known as a Sacred Fig tree. Bodhi trees are sacred in Thailand and in Buddhism because it’s believed that Buddha found enlightenment while sitting under a Bodhi tree. My purpose for wanting to plant it for Louise was different though. Years ago, when we were attending a charity event in Los Angeles, we were looking over the city while she told me about her “little blue book,” a pamphlet that outlined how mental patterns contributed to physical and emotional issues, along with affirmations to change them. She talked about how she carried that book with her everywhere, taking it from bookstore to bookstore, asking them to sell it. The only bookstore to agree way back then, was the Bodhi Tree bookstore in Los Angeles (now closed). The minute her little blue book was placed on the shelves, it began flying off of them! We all know what happened next. A star was born. It was these small moments together, when I’d gain more insight into her courage, commitment and determination. And I’d be reminded that my beloved friend is also this amazing, accomplished woman.

As I walked through the busy outdoor garden market, I started to lose faith. I didn’t know what a Bodhi sapling looked like. How would I find it? We walked into a stall with trees and began pantomiming with the owner, who spoke zero English. After several hand gestures toward what we thought might be possibilities, Joel used the Google Translate app and the owner heard the word “Bodhi” in Thai. I watched her face light up with understanding. She took my hand and led me over to a corner of the stall. They looked a little like Bodhi saplings. “Bonsi,” she said. We understood from Google Translate and hand gestures that it would grow to about 5 or 6 feet and be easier to plant anywhere. With more Googling, I learned that we had chosen a Bonsi Banyan — also a Sacred Fig, related to the Bodhi tree. 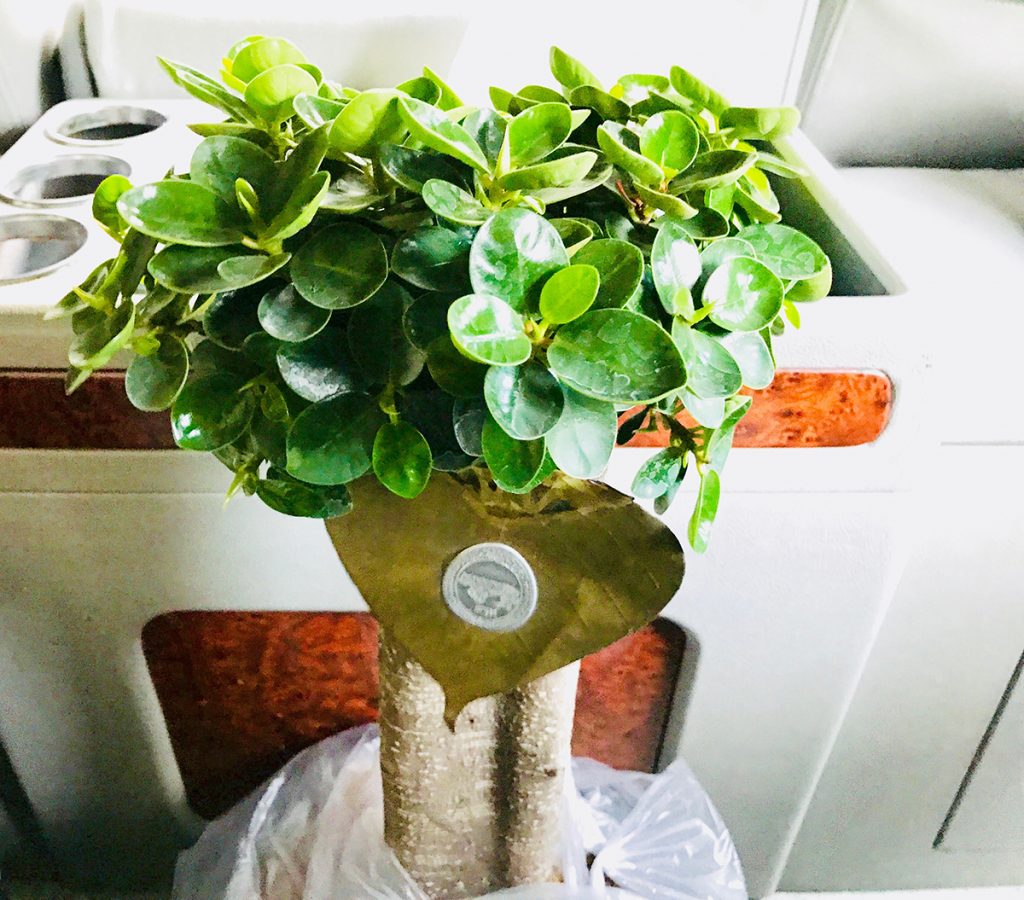 This is the Bonsai Banyan sapling. We got a bronze Bodhi tree leaf with a Fire Tiger on it from a local temple. Fire tiger was Louise’s Chinese zodiac sign.

We bought some gardening supplies, got some bottles of water, and set everything up for our trip the next day. The next morning, we awoke early and excited. Neither Joel nor I had any idea how this would go or whether we’d get permission to plant the tree. We were headed to Doi Inthanon National Park, the highest mountain in Thailand and a protected national park named for the late king Inthawichayanon, who cared deeply about preserving the forests.

Our English-speaking Thai guide, Deang, told us to follow her and we entered the forest by going deep into the cool, dark forest, down a set of concrete stairs. I found my balance faltering and suddenly, I was back in my dream. “I’ve been here before,” I said. Deang looked at me questioningly. “I had a dream the other night that I was here with my friend who we’re planting the tree for today.” Deang’s eyes got big. In my Native American culture, sharing dreams is important and part of how we move from the unseen world into the seen (how things manifest). At the time, I didn’t realize that dreams were also important and revered in the Thai culture. She said, “Do you want to plant the tree here?” I looked at Joel. “Let’s see what they say,” he said. We continued to the spot where we were to meet our Hmong hill tribe guide. When we met up, there was conversation in Thai, where we found out that we were not allowed to plant in this location. While I was disappointed, I realized that as Louise always said, “Life loves me” and we’ll find the perfect place to plant her tree. 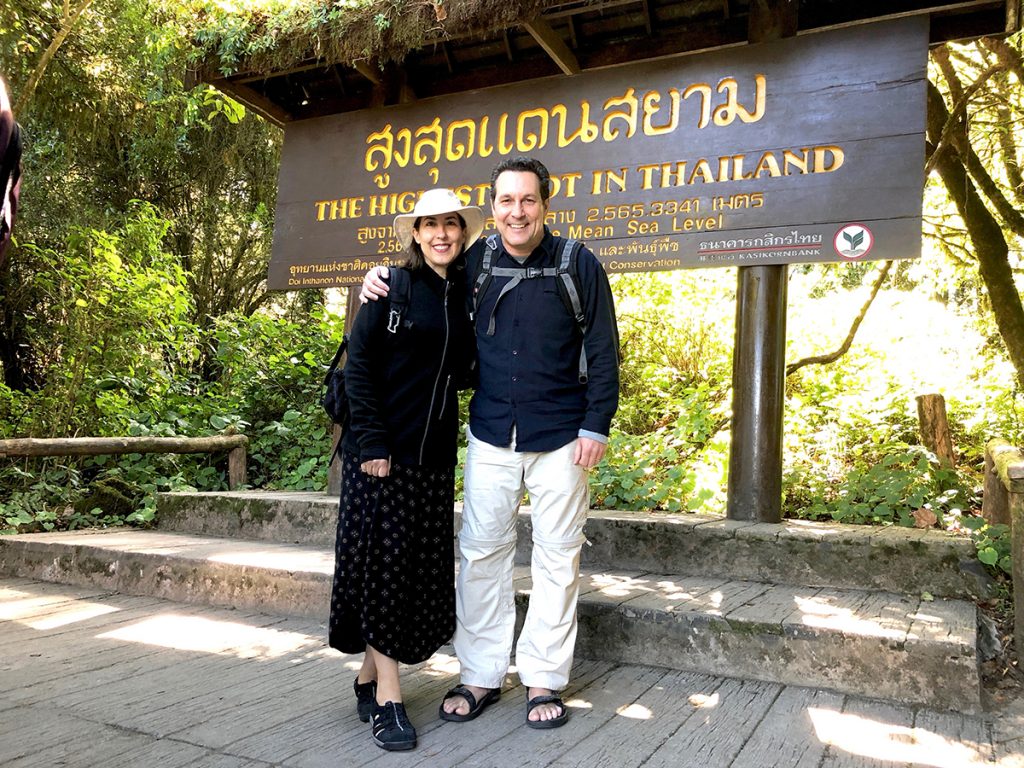 Joel and me at the top of Doi Inthanon, the highest point in Thailand

After our 1.5 hour trek through the mountain rainforest, we experienced spectacular terrain and breathtaking views. At the end, Deang said, “I’m taking you to the best waterfall here.” As we arrived at the Wachirathan Waterfall (pronounced wah-chee-rah-THAN), Deang spoke to the park rangers. After some excited discussion, she said, “Can you show them the tree?” We showed them and there was more talking. “They said you can plant it here and they’ll let us know where after they check.” Hopeful, Joel and I walked over to the waterfall. It was powerful. Fatigued from an arduous hike, I felt the waterfall filling my body with energy. Spray from the falls were gently streaming across the grass. “Her tree will have plenty of water,” Joel said, smiling. 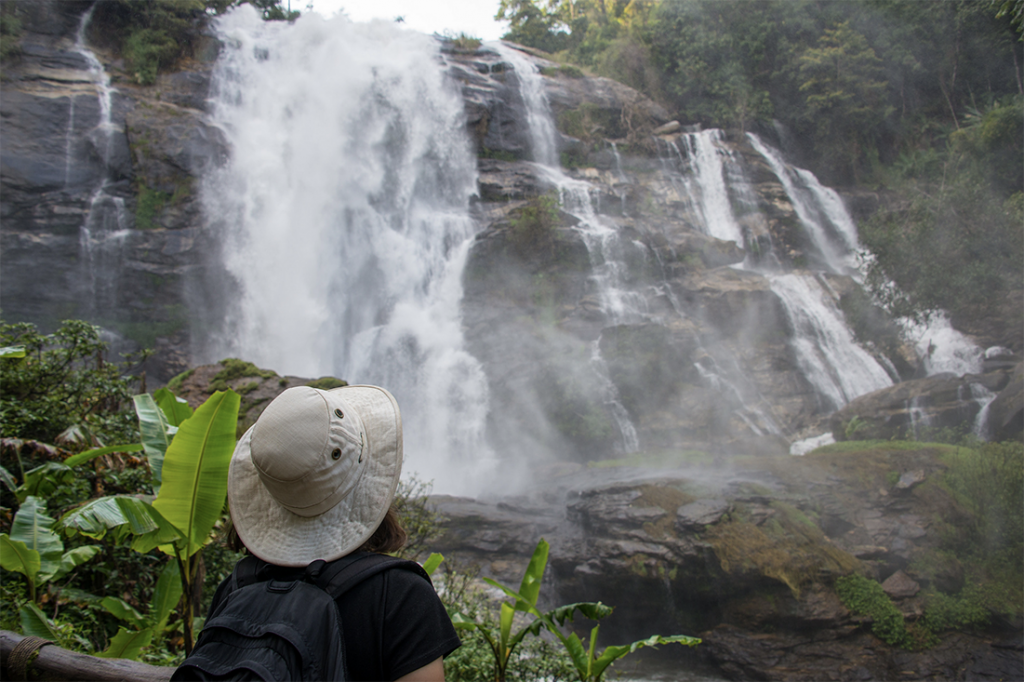 Heather takes in the beauty and energy of Wachirathan Waterfall.

The park rangers came over and showed us where we could plant Louise’s tree. I was incredulous as they pointed to the entrance, a beautiful spot at the foot of the falls and the first thing people would see when arriving. “Of course,” I said, “Louise who always got the best parking spots, gets the best spot in the park!”

I was further pleasantly surprised as the park rangers, showed up with a hoe and began digging the spot for Louise’s tree. In under a minute, they dug the hole and asked me to plant the tree. Everyone helped. Everyone was smiling, excited. “Thais love a good mission,” Deang said. I was beside myself. They handed me the bottles of water and we watered the tree. Then, I was kindly guided over to the sink to wash my hands. We all gathered back at the tree and I did a Native American medicine wheel – sacred circle — meditation. In this sacred circle, we honor the circle of life. As we stood around the tree, I brought our Hay House family, friends, and loved ones into the circle. I brought all people in the world who love Louise Hay. All people whose lives were touched and healed by her. We all gathered together in spirit. We all celebrated this international planting. This gift to Mother Earth for the gifts that Louise brought to all of us. A new life for the woman who changed our lives. All I felt standing there, with Joel and my new Thai friends – and all of you — was love. 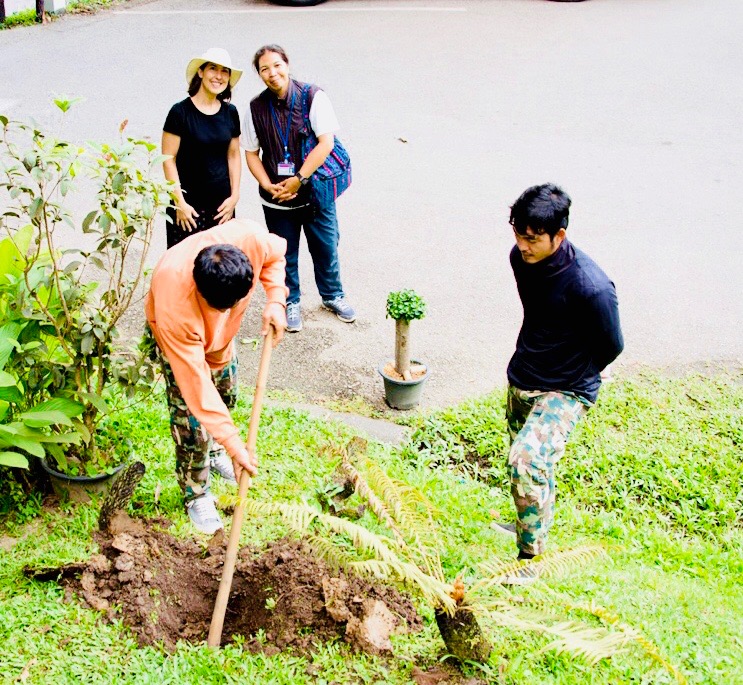 Preparing the earth for planting. 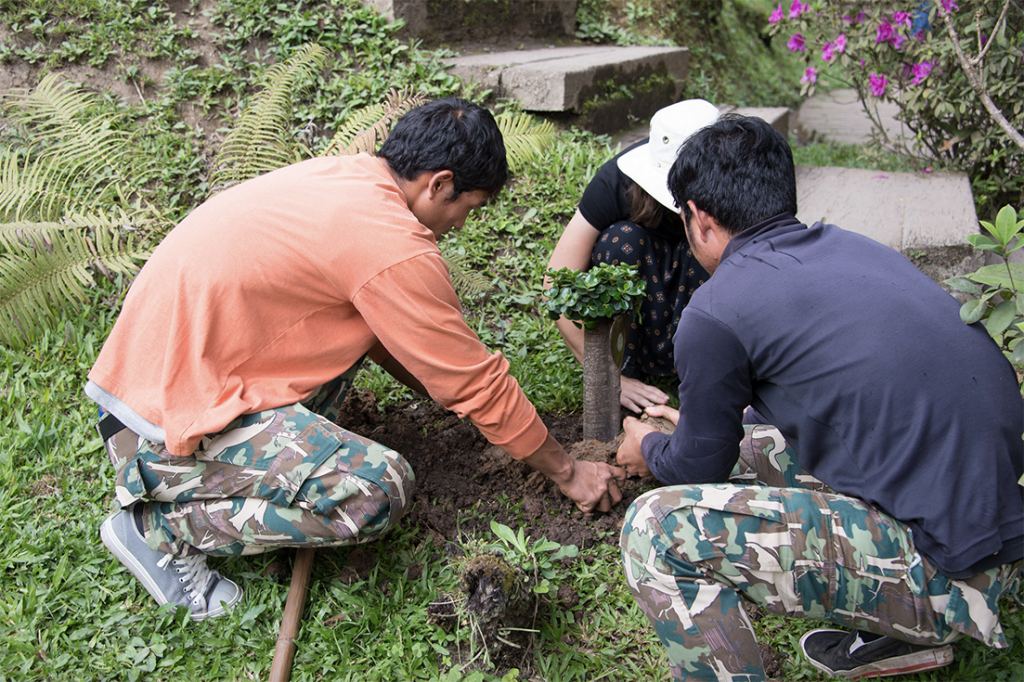 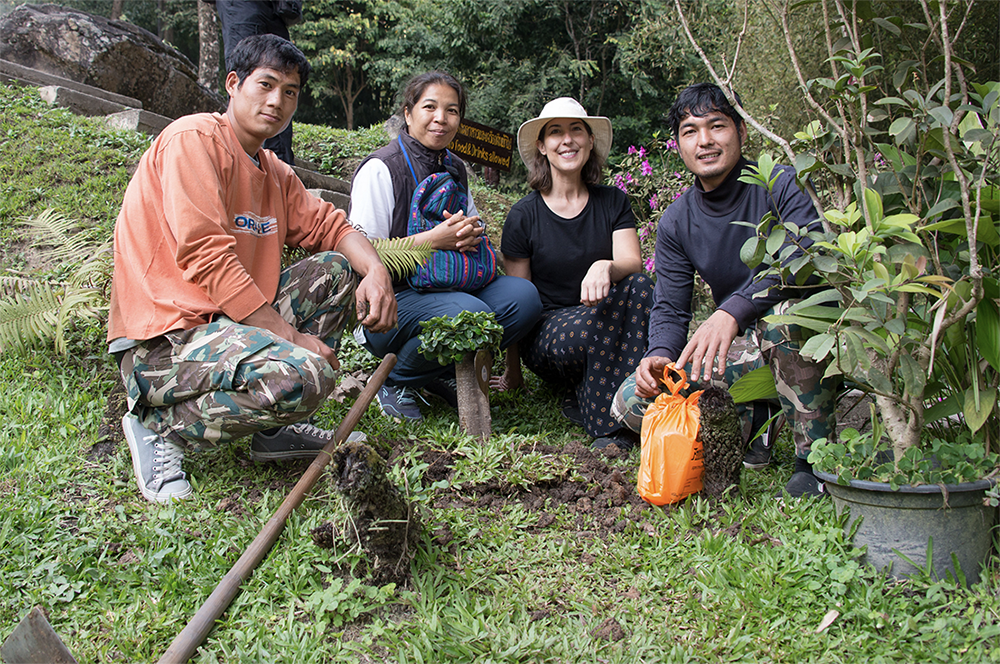 I want to thank Reid Tracy and everyone at Hay House for their love and kindness over the years. Louise created a home, a family. One that grew into a place that spread love, kindness, and healing around the world. Louise and Hay House have been responsible for some of the most expanding experiences I have ever had. I also want to thank my Thai friends who helped us plant this tree: Deang, Chaiwat and Vitaya. In the work I’ve been doing to rediscover my Native American roots, I firmly believe that soil is the connective tissue of Mother Earth and people are my medicine. Every time we create new life within the soil, we have another opportunity to reconnect. I hope you’ll share your story of planting a tree for Louise, so that we may all be reminded that through this process, we are one. May we bless and prosper one another, and may we always remember that life loves us.