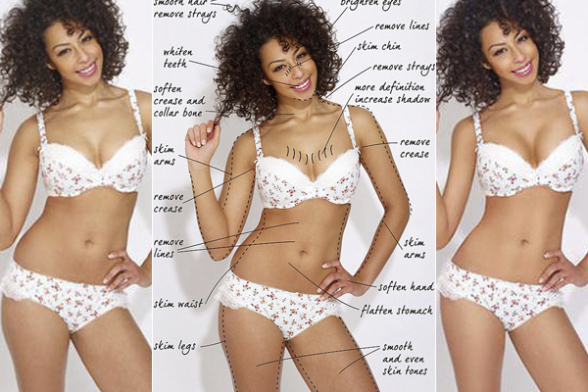 I grew up with parents who liked to antique, so many of my childhood vacations were spent in New England towns, rather than beaches. Because of this, I never really knew what real women’s bodies were supposed to look like – thinking airbrushing illusions I saw in magazines were “real.”

It’s not surprising that I would judge myself harshly as I compared my own body to those in magazines. After all, the media excels at telling us we are “not good enough” in hundreds of different ways. Not to mention the industry’s favorite technique: airbrushing. Yes, airbrushing, that fabulous way of making all flaws – all things that aren’t perfect, aren’t someone else’s definition of beautiful – disappear.

The Role Of Media

I’m not sure I would say that the media causes eating disorders, but I do think it is a contributor. In fact, I think there are a lot of reasons why the food industry, the pharmaceutical industry and Madison Avenue have worked so hard to find ways to get us to buy, buy, buy. It’s not just the images, but also the messages: it’s not enough, we aren’t enough – and we need their product to make us feel whole again.

With competition on the rise and profits up for grabs, are we really surprised to find out that underhanded practices are going on? Whistleblowers from Enron, Phillip Morris and many other companies show evidence of information about harmful business practices being suppressed so that a few top dogs can make their multi-millions. Psychologists are hired to advertise in ways that will make us buy and chemicals are put into food products to make us want more – and it happens so often that we become desensitized. It’s just how it is, it’s convenient, it’s mainstream. And yet, more and more we are in an era of “buyer beware.” Even the food pyramid was influenced by politics, rather than true nutritional facts.

Eventually, if we take things for granted because they surround us, we just start to believe that they are true. And as the years go by, they infiltrate our culture, until they seem like truths to a whole generation. That’s what happened to me as a teenager, flipping through the compelling fashion magazines – all touting the latest secret to attracting a boyfriend, being happy and having those perfect abs. I even remember my mother saying, “There was no such thing as cellulite when I was growing up,” making me wonder if this was another way for money to be made from our “flaws.”

Here are some pretty telling before and after pictures to show just how different things can look before and after airbrushing. It’s incredible, this glossed over image of perfection that many of us have learned to believe is “best” – and yet not even the models themselves can measure up to their own airbrushed images.

It’s not my intent to create anger about these things – anger only serves to get our cortisol levels up! Instead, what would it be like to have a perspective of curiosity about the things we see and hear from this point forward? What if our commitment to ourselves, our loved ones and each other is to question our beliefs – rather than taking them for granted? What if our belief systems are based on some idea a profit-monger had years ago, that made it’s way into our unsuspecting culture? How would we know? Perhaps one way is to see if the thought or belief makes us feel bad or good. If it makes us feel bad, chances are it’s not sitting well with us. What would happen if we took those thoughts and beliefs – peeling back the layers – until we realized they were not truths at all?

Curiosity. Watching my thoughts has been one of the best exercises I have learned. I’ve become curious about everything now, recognizing how much of what I thought and believed came from my experiences growing up, things people told me, things I saw, things I learned. I’ve finally started to wonder who really came up with those things – maybe it was as innocent as a bunch of people who only had so much information – but the world has changed since then. Or maybe it was a person whose goal was to profit from my thought or belief. Like Enron stock was important to hold onto. Like cigarettes made me cool. Like being thin would make me happy. Each and every one of these statements were backed by multi-billon dollar profit-making industries.

Rather than anger, we can cultivate curiosity. And we can support one another in communities that recognize the value of who we are, rather than what we are. We can celebrate our uniqueness and cultivate self-love and self-esteem. If we focus on these things, we can change the world, even if it’s our own small corner.